Scientists from the Nano-Science Center at the Niels Bohr Institut, Denmark and the Ecole Polytechnique Fédérale de Lausanne, Switzerland, have shown that a single nanowire can concentrate the sunlight up to 15 times of the normal sun light intensity. The results are surprising and the potential for developing a new type of highly efficient solar cells is great.

- Due to some unique physical light absorption properties of nanowires, the limit of how much energy we can utilize from the sun's rays is higher than previous believed. These results demonstrate the great potential of development of nanowire-based solar cells, says PhD Peter Krogstrup on the surprising discovery that is described in the journal Nature Photonics.

The research groups have during recent years studied how to develop and improve the quality of the nanowire crystals, which is a cylindrical structure with a diameter of about 10,000 part of a human hair. The nanowires are predicted to have great potential in the development not only of solar cells, but also of future quantum computers and other electronic products.

- It turns out that the nanowires naturally concentrates the sunlight density up to a factor of 15 compared to what is normally present in the sunlight. But this also means that there is less light outside of the nanowires as the amount of energy is conserved. However, the concentration of sunlight will cause an increase in the efficiency of some few percent of the overall transformation of sunlight energy into electrical energy, says Peter Krogstrup and explains: Because the diameter of a nanowire crystal is smaller than the wavelength of the light coming from the sun it can cause resonances in the intensity of light in and around nanowires. Thus, the resonances can give a concentrated sunlight, where the energy is converted, which can be used to give a higher conversion effeciency of the sun's energy, says Peter Krogstrup, who with this discovery contributes to that the research in solar cell technology based on nanowires get a real boost.

The typical efficiency limit - the so-called "Shockley-Queisser Limit" - is a limit, which for many years has been a landmark for solar cells efficiency among researchers, but now it seems that it may be increased.

- It's exciting as a researcher to move the theoretical limits, as we know. Although it does not sound like much, that the limit is moved by only a few percent, it will have a major impact on the development of solar cells, exploitation of solar rays and perhaps the extraction of energy at international level. However, it will take some years years before production of solar cells consisting of nanowires becomes a reality, says Peter Krogstrup who just completed his PhD at the Niels Bohr Institute, University of Copenhagen.

The research is conducted in collaboration with the Laboratory des Matériaux Semiconducteurs, Ecole Polytechnique Fédérale de Lausanne, the Foundation and the company SunFlake A / S. Their scientific findings work support results published in the journal Science in January. Here, a group of researchers from Lund, showed that the sun’s rays was sucked into the nanowires due to the high amount of power that their solar cell produced. 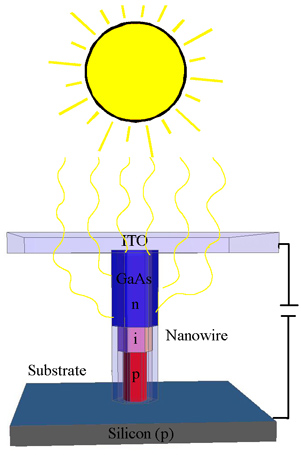 The figure shows that the sun's rays aredrawn into a nanowire, which stands on a substrate. At a given wavelength the sunlight is concentrated up to 15 times. Consequently, there is great potential in using nanowires in the development of future solar cells.