Scientists from Nano-Science center have developed a groundbreaking new method that gives the first insights into the mechanism controlling vital hormones such as cholesterol hormones and steroid levels in our body. The results may lead to improved medical treatment of a wide range of diseases related to specific hormonal and cholesterol disorders and maladies as diverse as allergies, dwarfism and heart diseases. The study has just been published in the scientific journal ACS Chemical Biology. 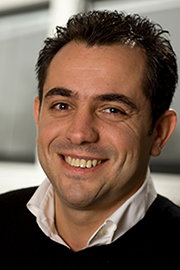 Grave consequences can come from even very slight imbalances in the tightly regulated hormone machinery of the body. The hormone system is notoriously difficult to study. Now scientists have successfully developed an approach that unveils how it system works:

"Our method allows us to finally open the lid on the black-box of the extremely complex regulation of cholesterol and steroid hormones in the body by looking at the responsible enzymes one molecule at the time. This has never been possible before," says assistant Professor Nikos Hatzakis who lead the interdisciplinary team of scientists from theDepartment of Chemistry, the Nano-Science Centerand the Center for Synthetic Biology at University of Copenhagen.

Dr. Tomas Laursen, who performed most of the experiments, adds:

"With this frontier development, we can finally reveal the most detailed understanding of the mechanisms leading to severe diseases caused by hormonal disorders."

Among its many functions in the body, cholesterol is turned into vital hormones such as steroids and the allergy-related hormone cortisol. The process is tightly regulated by a key gatekeeper enzyme called POR.

"When we studied POR at extreme magnification level, we were surprised to find to find multiple working rates –like a maestro conducting individual instruments of the symphonic orchestra. We believe that by doing so POR controls the selective activation of the specific enzymes (P450s) that then undertake the transformation of cholesterol," explains Nikos Hatzakis.

Understanding how the maestro, POR, – conducts this enzyme symphony can only really be understood by studying the maestro itself. And this is now for the first time possible with the scientists' novel approach.

This is only the beginning

Much larger implications are expected to come from the results as these enzymes are present in humans as well as in plants. In plants, they are involved in production of highly complex bio-active compounds that have huge potentials for the pharmaceutical industry e.g. as potent anticancer agents. In humans, they are responsible for detoxifying the majority of foreign compounds in the blood as well as converting cholesterol into multiple vital steroid hormones such as cortisol.

Black box opened by mimicking Nature in a cross-disciplinary collaboration
In order to gain this understanding, the scientists placed the enzymes in a membrane-like environment called a nano-disc which mimics the environment of a natural membrane. In the nano-disc the enzymes act naturally. For the first time this makes it possible to study the behavior of individual POR molecules with high-level microscopy.

The results come from a cross-disciplinary collaboration in the Center for Synthetic Biology at University of Copenhagen involving the Nano-Science Center and the Plant Biochemistry Laboratory bringing scientists from chemistry, nano-physics and plant molecular biology together. The single molecule measurements were done in the Bionano and Nanomedicine Group of D. Stamou of which Nikos Hatzakis is a member.